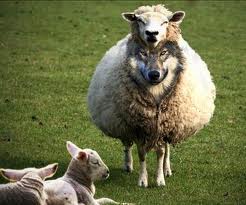 So he actually gave into the Enemy’s repugnant lie.  I had a feeling we had lost this one after your second letter.  Do not fret; your ability will grow with your pain and hunger.  Our Father below will not allow any of his servants to remain novices in this business of temptation, distraction, and destruction.  I realize that you might think that you have lost this battle and should begin another but I will inform you of the contrary.

We almost do more damage to “would be christians” through real members of the enemy’s camp than we do through our many loyal subjects.  We have a wonderful way of keeping the lesser beings in all but total ignorance in regards to how the Enemy would have them live.  When they stumble through this world with little knowledge of their master they do Him a grand disservice and us a great act of kindness.  We have so many infiltrators that live among their brood and so many false doctrines engrained in their thinking that the momentum of this battle is still on our side.  We can still use and abuse this young man for many a year and in ways that we might have not been able to if he were not a subject of the Enemy’s.  I find it quite cruel the way the Enemy offers so much hope at the beginning of the relationship and then allows us to ravage them like wolves in a sheep pen.  The ignoramuses should have realized that the only reason the Enemy says He cares for them is so that He can gather them unto Himself and say that He has more converts than our Father Lucifer.  But, as we well know, our Father has won at least seven out of ten of the beasts for his collection throughout the history of this planet, which is far more than the Enemy will ever achieve with any of His useless “revivals”.  I must keep to the subject at hand for I could write all day about our Father’s accolades.  I will now list to you some of the wonderful devices and lies we have set up within the Enemy’s camp.

As I mentioned in one of my earlier letters, we have whole denominations set up with the Enemy’s name on them that we can use to keep the young patient from becoming more steeped in the ways of the Enemy.  Some of these denominations are so full of our people that no more than one to five percent of them actually have any sort of tie to the Enemy Himself.  We also have some denominations that use the name of the Enemy’s detestable Son that don’t even have any real believers in Him among them.  Both of these devices are so successful because so many of His converts never spend time with Him or read the instruction book that He so painstakingly preserved for them.  This disease results in doctrines being developed based on corrupted human logic and limited perspectives of their experiences, which we have manipulated beyond recognition.  I am happy to say that His subjects are more interested in our media than they are His will, which leads me to another device of ours.

Where as in earlier generations we had to wait patiently for one of our lies, false doctrines, or demented pleasures to spread throughout this obscure globe, now we have the great privilege of sending a barrage of them across the earth in a fraction of a second.  The humans have developed such tools as web-sites and cable TV so that we no longer have to personally whisper in everyone’s ear to tempt them to think on things that are prohibited by our Enemy.  Half of our work is already done before we ever arrive.  I would have to send to our statistical database to claim the exact numbers but I believe that at least 50% of the men in the Enemy’s army behave in some sexually immoral behavior on a regular basis.  With the help of loosening moral standards within the societies on earth we have been able to present scrumptiously lustful images to “godly men” that far surpass anything they could have trumped up in their own fantasies.  We have brought sexual connotations into almost every program on their television channels and have disguised them with cute family settings and equal opportunity agendas.  We have done a wonderful job at getting their broadcasters to present almost every form of ungodly living that we applaud with the excuse that they are just giving equal airtime to an equally viable lifestyle.  This post modernism philosophy has been such a successful campaign that whatever perverted lifestyle we can get one of the simpletons to live out will soon be ratified as an honorable way of life and will be protected with the same fervor as any other minority group on this planet.

The followers of the Enemy help us tremendously in these cases by labeling the perverted individuals with the sin they partake in and campaigning against them in their governmental halls and social structures.  Many of them are relentless in their efforts to produce their blessed “KingdomofHeaven” during their lifetime and in their respective countries through political means, even though the Enemy Himself has said that this will not happen.  This effort by these ignorant christians is one reason we have so easily changed the laws of the nations to support sin.  The masses are so tired of not conforming to the impossible standard of the few unforgiving zealots that they continue to fight for their “counter culture”.  What better way to make sin go away than to legally outlaw the very idea of sin?  And what member of our ranks could neglect to mention the benefits of that wonderful word “campaign”.  Fortunately for us the majority of the subjects in the Enemy’s camp spend more time trying to win their political agenda, whether it is pleasing to their master or not, than they do trying to win converts for their master.  If ever you believe your patient is in danger of being presented with the Enemy’s great lie just turn the conversation towards politics. This so-called “messenger of love” will soon assault your patient with various hardened opinions of which most are actually in opposition to the Enemy’s decrees for His people.  All of these devices have given us great strength in warding off any small advances that the Enemy might bring against us.

If all of these strategies fail to distract your man, take heart, for there is still much hope.  There is a wonderful phenomenon going on in their churches today which is of tremendous encouragement to our Father and our spiritual brethren.  This trend, which we have infiltrated into their worship, not only lies to their mind and emotions but also frustrates the Enemy greatly.  This manipulation is embodied in the actual words they sing out to the Enemy as well as in the misleading emotion they receive from the experience.  We have swayed even the most knowledgeable of their converts to sing songs that call for the Spirit of the Enemy to fall down upon them like He were some kind of mist, all the while ignoring His permanent residence within them.  They speak of our most ever-present foe as if He were hiding in ceilings and only strongly felt emotion could bring Him out.  If He were not such a pain in our side and a constant threat to our Master I would be appalled by the way they treat Him.  For example, I have personally tempted various leaders within their camp to act like they were wielding the dreadful Spirit like He was a baseball, throwing it at people so that they might seemingly receive Him or His power as they fall down.  Praise our Father that so many of the Enemy’s servants have no inkling about how to commune with the Spirit inside of them.  A great many of them don’t even believe that He is in existence let alone that He never leaves from within them.

I would like to think that we could somehow cause Him to forsake the patients but none of our many years of effort have yet produced that outcome on any of the patients that we have lost to the Enemy’s cause.  But our research is not complete in this area and I have hope that someday we will achieve this end.  None the less we have done a great job in keeping their imaginings about their spiritual experience in the forefront of their minds while keeping their true spiritual state as a lost notion in the back of their brain.  In short they believe, consciously or unconsciously, that self-induced emotions are the mirror of their spiritual well being and that the Spirit of the Enemy is a beckoned projectile.

So you see my dear Lustmoth, all is not lost.  We still have an overwhelmingly good chance of making this patient’s life a wonderful collage of pain, suffering, discomfort, and dissatisfaction.  We have so much on our side that it is impossible for the Enemy’s expectations of our war with Him to come to fruition.  We have drunk the life out of millions of His little broken puppets and we will drink the life out of millions more.  Hold on to the hope given to you by our feared Father and remember that each and every moment with the creatures is a battle for their flesh.  If you fight for their flesh with more vigor than they fight against it then you will reap the gluttonous joy of feasting on a defeated foe.  I look forward to hearing of your successful endeavors or else I will make your demise an endeavor of mine.

Your wise and continually hopeful mentor,